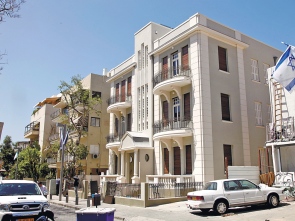 Garlic cloves hung from the front door at 9 Bialik Street in Tel Aviv as a harbinger of good luck for the new owners. Last year the residential building was completely renovated. Its historic features were preserved, three underground floors were added, the facade was painted and the windows replaced. Now it is a bright, polished home that looks as though plastic protective wrappings were just removed from it. But the main change is that what was once a building of apartments will now serve as the private residence of the Gertler family from Britain, which has developed a small hotel empire in Israel. Thus 9 Bialik Street has joined a group of historic structures in the city that over the past decade have been transformed from apartment buildings to private townhouses owned by the wealthy.

The most conspicuous example of the trend is the Pagoda House on King Albert Square, at the corner of Nahmani and Montefiore streets. For years the building stood in a state of disrepair before being purchased in the late 1990s by Swiss-Jewish billionaire Robert Weil, for $5.5 million. Weil funded a lavish renovation, and the Pagoda House turned into one of the city's most eye-catching structures. Not far away, on the corner of Nahmani and Goldberg streets, the deserted Lodzia factory, known as the Red House, was purchased by businessman-philanthropist Roni Duek. It too is slated for thorough renovation. Marius Nacht, one of the founders of Check Point Software, purchased a historic dwelling in the city's Neveh Tzedek neighborhood. Attorney Dan Lahat, son of legendary Tel Aviv Mayor Shlomo Lahat, lives in a three-floor villa on Karl Netter Street.

No. 9 Bialik Street was built in 1928, when the eclectic building style was reaching its peak in the country. Architect Pinchas Philip Huett designed an opulent structure replete with Parisian balconies and art deco stairwells. Particularly conspicuous is the decorative rooftop that caps two columns in the building's entrance area - a unique feature of Tel Aviv's architectural repertoire that looks like a small temple. For years 9 Bialik Street served as an apartment building, but due to a lack of adequate maintenance its condition deteriorated. The Gertler family purchased the entire building and hired architects Gidi and Tal Bar Orian to design a renovation plan. Gidi Bar Orian explains that the new design caters to the family's needs: The ground floor features a living room, kitchen and communal area; the second floor is divided into children's bedrooms; and the parents' bedroom is on the third floor. The building can be divided into a number of self-sufficient living units, each equipped with a kitchen and bathroom.

During the renovation, space was dug out for an underground parking lot and a large hall to house the family's art collection. A pergola sits on the building's roof and will function as a kind of summer living room. The building's total area is 1,100 square meters - about six times the average size of an Israeli home. "We made an effort to preserve as many of the home's original components as possible in the renovation," explains Bar Orian. "For instance, we preserved the building's decorative flooring. The renovation created an interesting combination of old and new. It was important not to turn the building into Disneyland and so we chose subtle colors for the exterior. The big challenge involved the interior design: The trick was to create a sense of a private house, and overcome the staircase, which is the sort that is ordinarily used in an apartment building."

The renovation at 9 Bialik Street contributes to a renewal process in this street that has been going on for the past three years. The Tel Aviv municipality invested considerable sums to upgrade street infrastructure. Electric cables were installed underground and Bialik Square was renovated. Two years ago Beit Ha'ir, a museum and cultural facility located in the old municipality building on the square, opened. The nearby Reuven Rubin Museum will apparently add a new wing, and at the end of the same street a small Bauhaus-style gallery opened in a building owned by billionaire Ronald Lauder.

This renovation spree has clear real estate implications: real estate agents estimate that prices on Bialik Street are 10 percent higher than those on nearby roads. Will Bialik Street turn into a thoroughfare for the rich only, and will more of its buildings be converted into exclusive villas for wealthy home buyers from Israel and overseas? One senior official at the Tel Aviv municipality dismisses the trend as a small-scale phenomenon. "It's better that it happens here rather than somewhere else," he says, referring to the city taxes that will flow into the municipality coffers from the pockets of the new homeowners.